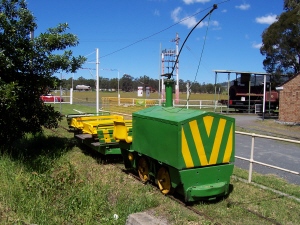 Status: On Static Display only

After slight modifications, a trolley pole was fitted so it could run on the ILRMS tramway along with a former man car. Coupled with this man car, it hauled passengers around the perimeter of the societies shed until being decommissioned during 2008 due to operating difficulties.